A History of Christianity 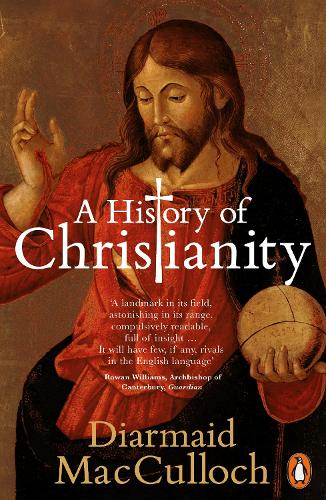 Diarmaid MacCulloch’s epic, acclaimed history A History of Christianity: The First Three Thousand Years follows the story of Christianity around the globe, from ancient Palestine to contemporary China. How did an obscure personality cult come to be the world’s biggest religion, with a third of humanity its followers? This book, now the most comprehensive and up to date single volume work in English, describes not only the main facts, ideas and personalities of Christian history, its organization and spirituality, but how it has changed politics, sex, and human society. Taking in wars, empires, reformers, apostles, sects, churches and crusaders, Diarmaid MacCulloch shows how Christianity has brought humanity to the most terrible acts of cruelty - and inspired its most sublime accomplishments. ‘A stunning tour de force’ Simon Sebag Montefiore, Sunday Telegraph Books of the Year ‘A landmark in its field, astonishing in its range, compulsively readable, full of insight … It will have few, if any, rivals in the English language’ Rowan Williams, Archbishop of Canterbury, Guardian ‘A prodigious, thrilling, masterclass of a history book’ John Cornwell, Financial Times ‘Essential reading for those enthralled by Christianity and for those enraged by it’ Melvyn Bragg, Observer, Books of the Year ‘Magnificent … a sumptuous portrait, alive with detail and generous in judgement’ Richard Holloway, The Times Diarmaid MacCulloch is Professor of the History of the Church at Oxford University. His Thomas Cranmer won the Whitbread Biography Prize, the James Tait Black Prize and the Duff Cooper Prize. He is the author most recently of Reformation: Europe’s House Divided 1490 - 1700, which won the Wolfson Prize for History and the British Academy Prize.